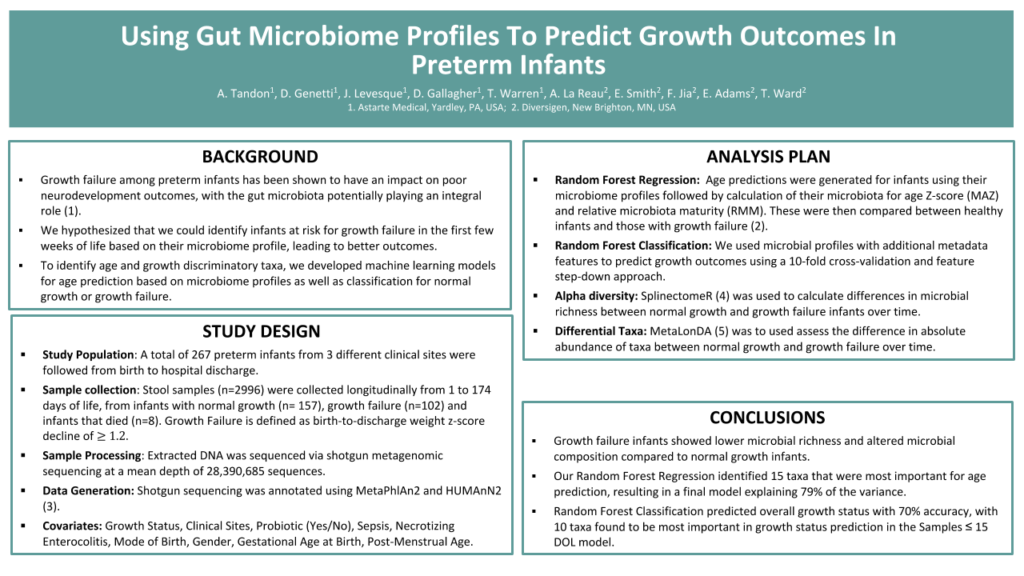 Growth failure among preterm infants has been shown to have an impact on poor neurodevelopment outcomes, with the gut microbiota potentially playing an integral role. We hypothesized that we could identify infants at risk for growth failure earlier based on their gut microbiome profile, leading to better outcomes. To identify age discriminatory taxa, we developed machine learning models on a large retrospective dataset.

Stool samples (n=2996) from 267 infants were collected longitudinally (DOL = 1 to 174) from infants with normal growth (n= 157), growth failure (n=102), and infants that died (n=8). Extracted DNA was sequenced via shotgun metagenomic sequencing (Illumina NextSeq 2×150) at a mean depth of 28,390,685 sequences. Microbial profiles were annotated with MetaPhlAn2 and HUMAnN2.

Microbial richness was higher in normal growth infants compared to those with growth failure, and Escherichia coli was significantly associated with beta diversity differences between early samples. We used microbial profiles with or without metadata to predict growth outcomes using Random Forest classification. Nine taxa were important for model performance and predicted growth outcome with 82% accuracy (10-fold cross-validation). Random Forest regression was used to predict an infant’s microbiota age. Twelve taxa were most important for age prediction, resulting in a final model explaining 79% of the variance, with microbiota age being lower in infants with growth failure.

These models may aid in clinical decisions, such as adjusting feeding for infants delayed in their microbiome maturity and early identification of infants at risk for adverse growth outcomes.