A Dozen Reasons (aka Excuses) Not To Feed a Preterm Infant 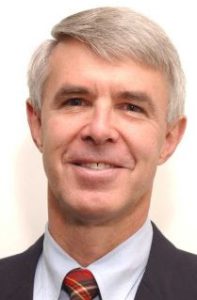 Normal growth of preterm infants is fundamental, including how to assess it, so that we know whether the nutrition we are providing is appropriate and sufficient to achieve normal growth.

Why is growth important?

Because it is THE unique characteristic of fetal and thus preterm infant life. It is what the fetus, and thus the preterm infant, must do in order to survive and to develop into a healthy, capable child and adult. The American Academy of Pediatrics has stated (AAP, Pediatric Nutrition 8th Ed. 2019), “Current recommendations for parenteral and enteral nutrition for very preterm infants are designed to provide nutrients to approximate the rate of growth and composition of weight gain for a normal fetus of the same postmenstrual age, and to maintain normal concentrations of blood and tissue nutrients.”

If growth is so important, why don’t preterm infants always grow as the normal fetus does?

Frequently, preterm infants have been fed unfortified breast milk (mother’s own or banked) at slow rates, and intravenous amino acid mixtures can have insufficient amounts of essential amino acids, which will limit growth. 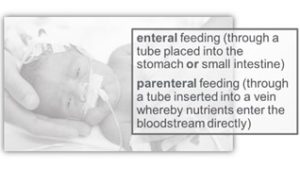 These are the facts, and the good news is that over the past 10-15 years we have been doing better to limit these causes. Unfortunately, there still is the nearly universal perception that when anything might be wrong with a preterm infant, feeding must be decreased, delayed, interrupted, or withheld, often for lengthy periods. It is this perception that promotes “reasons” (aka “excuses”) that continue to cause nutritional delays that lead to under nutrition and delayed growth. Over many years, I have documented such “reasons” and have presented these on rounds in the NICU and in lectures, adding personal comments about why they might be wrong or misleading or exaggerated and might be more detrimental to growth and development than continued feeding might be.  Here are a dozen examples, with some of my editorial comments: 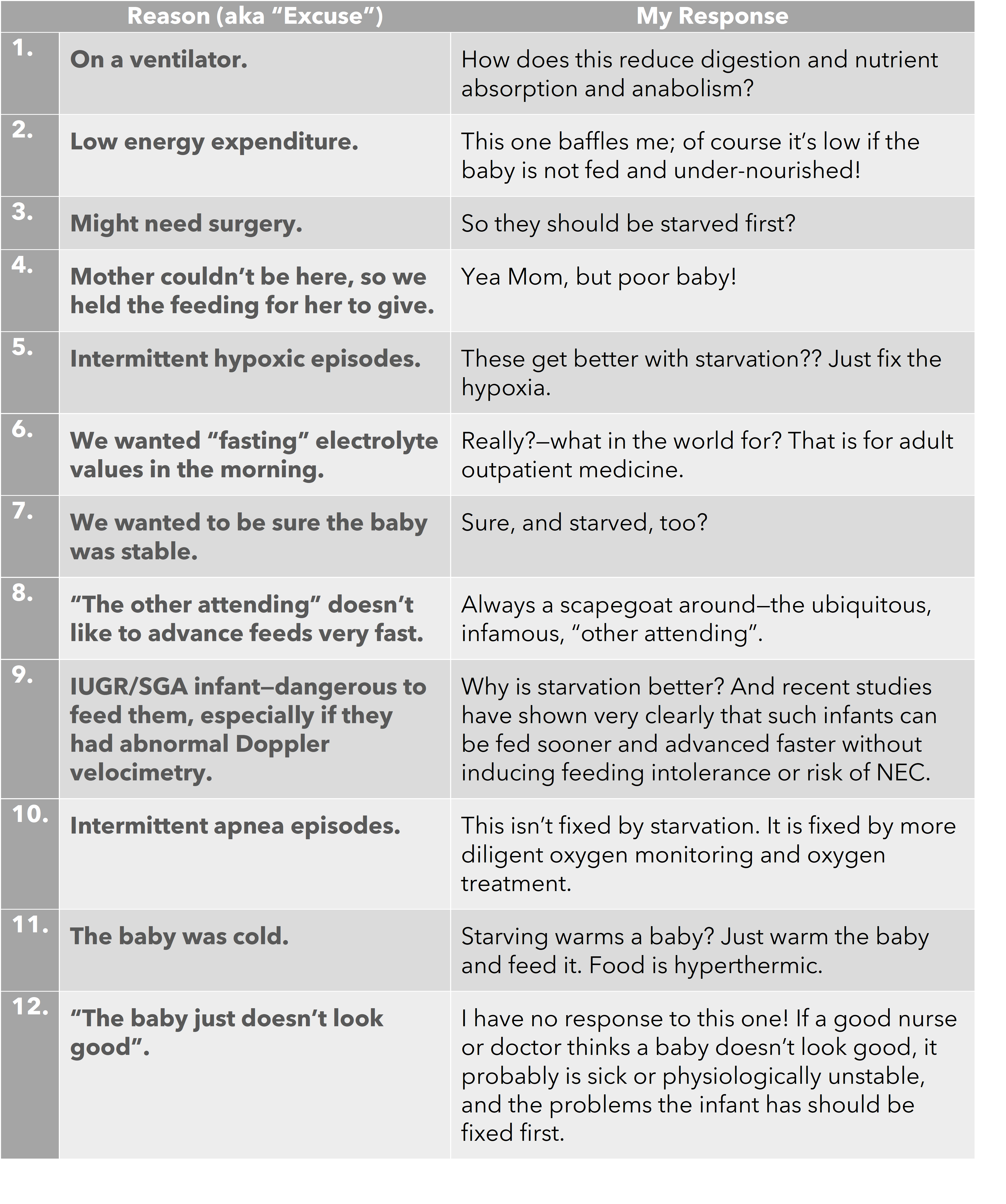 And there are many more–!! The reasons (“excuses”) seem never ending. The point is, though–all of these excuses, justified or not, reduce nutrient intake at critical stages of development, which limits growth with increased potential for long-lasting adverse outcomes.

One simply cannot say that factors other than under nutrition (e.g., many illnesses and pathophysiological processes and their treatments) are responsible for inadequate growth until one has provided appropriate and sufficient nutrition to meet the nutrient requirements of the preterm infant that match those of the normally growing human fetus.

Dr. William W. Hay, Jr. served as Professor of Pediatrics (Neonatology) at the University of Colorado Denver (retired). He was Head of the Section of Neonatology from 1982-1992 and Director of the ACGME/RRC accredited Training Program in Neonatal-Perinatal Medicine from 1982 until 2003. He also served as Director of the Child Maternal Health Program, now the Early Life Exposures Program and was Director for 36 years of the Neonatal-Perinatal Clinical Translational Research Center, for the NIH-NCATS-Colorado Clinical and Translational Sciences Institute. Dr. Hay’s principal administrative role was Scientific Director of the UCDenver–Department of Pediatrics/Section of Neonatology Perinatal Research Center. He is principal investigator and program director for an NIH-NICHD T32 Training Grant in Perinatal Biology and Medicine. Dr. Hay is widely published, with his research and scholarship appearing in more than 400 articles and books.